I apologize ahead of time for the lengthy post, but I'm trying to give as much detail up front as I can.

First of all, this is the first 8n engine that I've messed with. I'm not a mechanic, more of a tinkerer. So with that in mind, here's what I've got.

I put a 1950 8n front mount distributor engine on a 1947 Cletrac HG undercarriage. 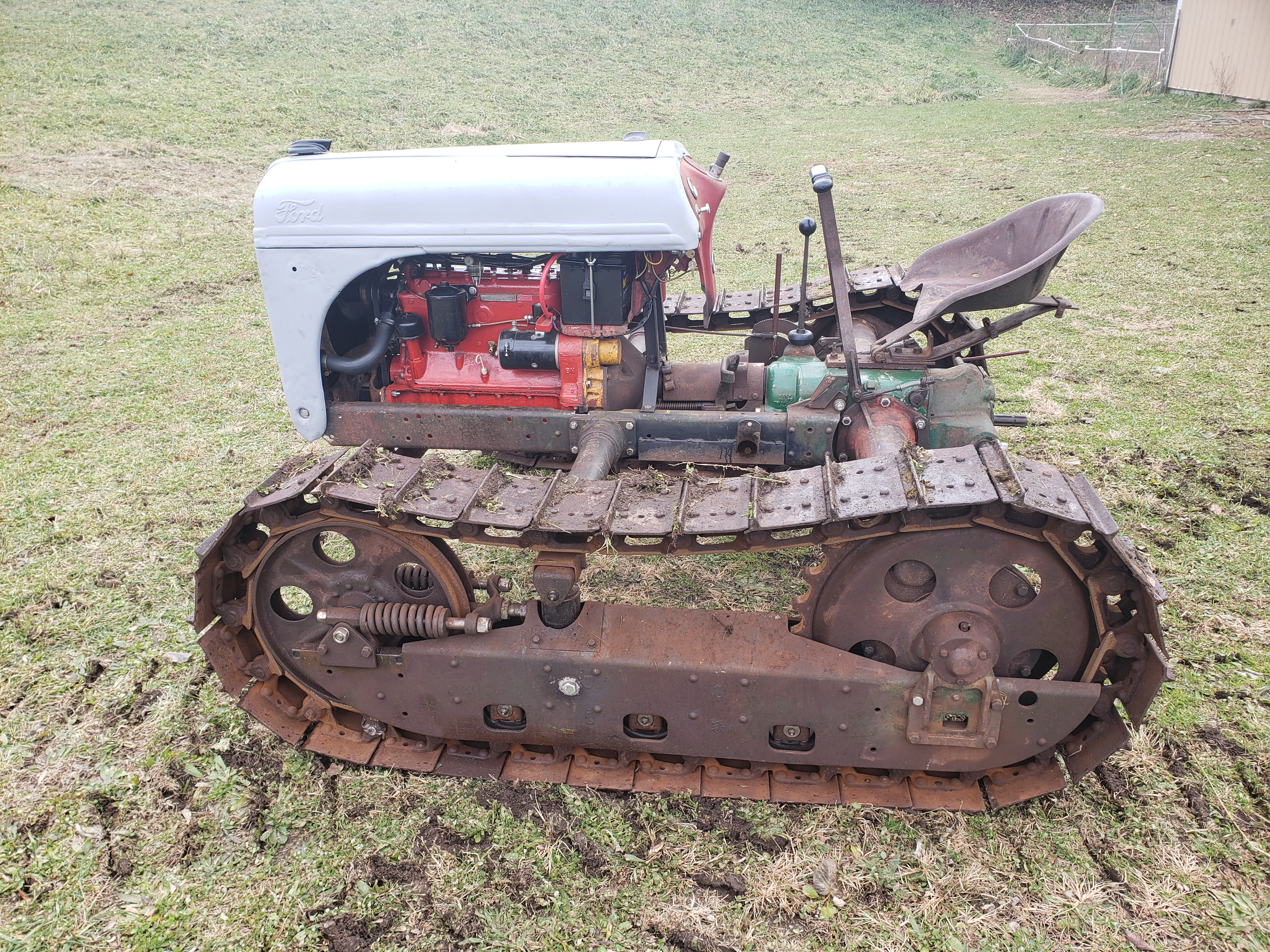 The 8n engine came in trade on another project I was working on. It had supposedly been rebuilt by the previous owner, but of course, I'd take that with a grain of salt. However, the engine was painted up nicely, had a new intake/exhaust manifold installed, new starter, new alternator, etc. It came with the wrong carb, so I got a correct original TSX241 that was rebuilt by a guy who is known to be a reputable rebuilder of these Marvel Schebler carbs.

When building this machine, I went ahead and converted to 12 volt and put in a new wiring harness. I've also put on new Autolite 437 plugs, new plug wires, new distributor cap, new points, condenser and rotor. The coil that came on the motor measures 2.5 ohms resistance, so my understanding is that was already a 12 volt coil, so I did not replace it. Point gap and timing has been set according to the manual and valve adjustment has been confirmed on compression stroke.

I finally got the engine installed and have gotten it started up. After some initial adjustments, I've gotten it to the point that it starts reliably. The issue I'm having is that the engine is bogging down under any amount of load.

The results of a dry compression test are:

The pic shows the plugs after running it around in front of the barn for a little while. As you can see, the plugs for cylinder 1 and 4 are very sooty compared to 2 and 3. 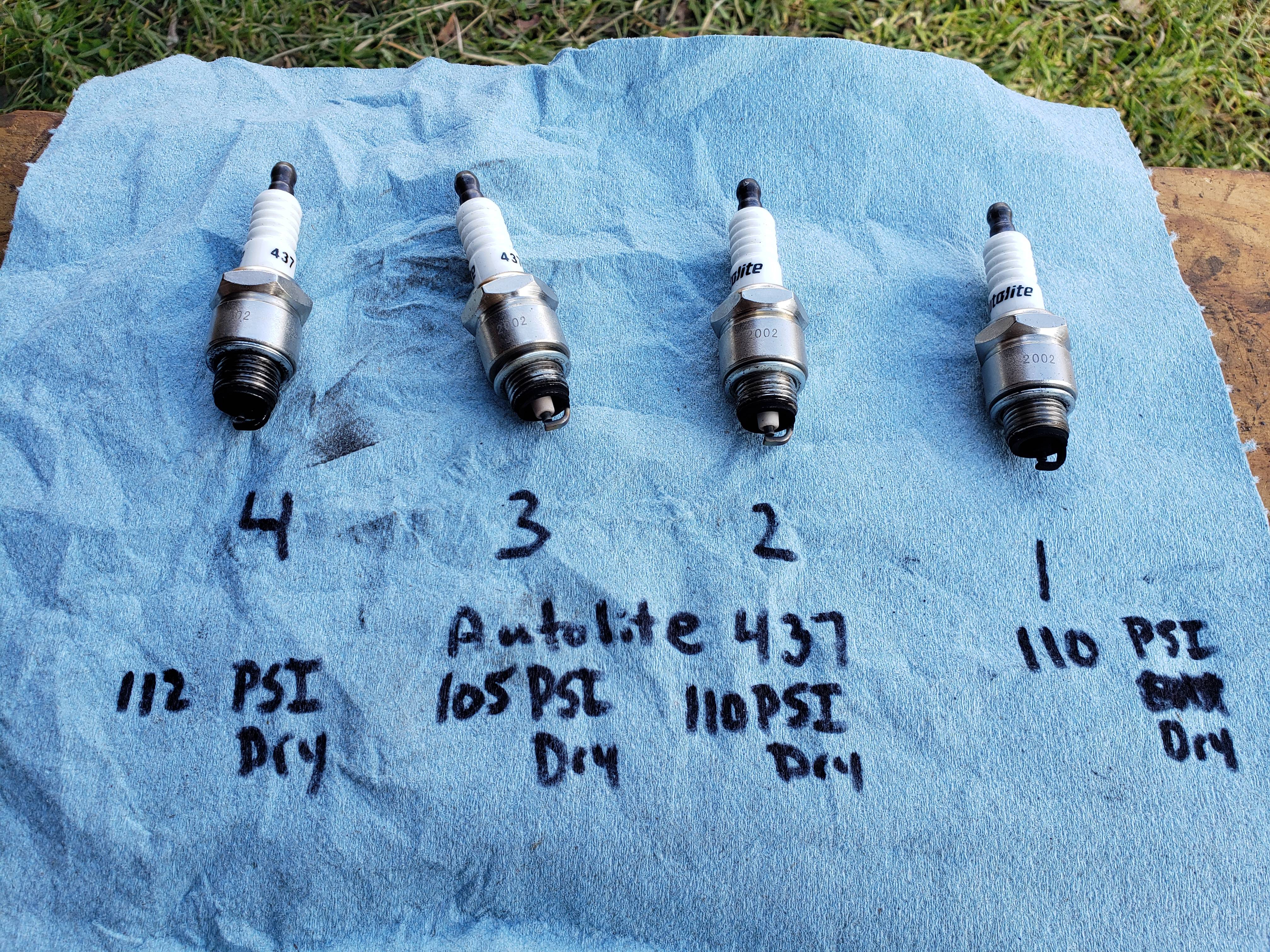 I know bogging down can be a symptom of a bad governor, so I unhooked the governor to carburetor rod and ran a piece of wire straight to the carb so that I could control it by hand and it's still bogging down and a bit slow to react when going from idle to full open throttle. Not sure if this is a good test or not, but to me, it seems to show that even if the governor was part of the issue, there's still another problem.

First gear and reverse allow movement with some bogging, especially when steering as steering with this crawler is like pushing on a brake to turn right or left, second gear is worse and it will barely move in 3rd. Same results if the gas cap is removed so it's not a plugged tank vent.

So I guess I'll start with two questions. First, any idea of that is causing plugs 1 and 4 to look so different from 2 and 3? Secondly, based on what I said above, any idea of what could be causing the bogging with the governor disconnected?

One thing that I've wondered about is if the previous owner got the cam gear timing right. Not sure what the symptoms of a mistimed cam gear are, but I'm running out of ideas on what the issue may be. Also, the valve adjustments were checked on the compression stroke, not necessarily TDC.....would that make a difference?

I'd appreciate any ideas and just let me know if you need any additional info, thanks!